On 17 September, the 2nd National “CNBM Cup” Inorganic Nonmetallic Materials Quiz Contest kicked off in the time-honored city Xi’an, bringing together around 90 teams from 50 HEIs nationwide. XMU team “xmucer” won an award for excellent performance at their first appearance in the contest. The team was formed by 3 senior undergraduates, Wang Bingjun, Luo Qiming and Zhao Rong, from Class of 2013, and the team was led by Associate Professor Xue Hao. 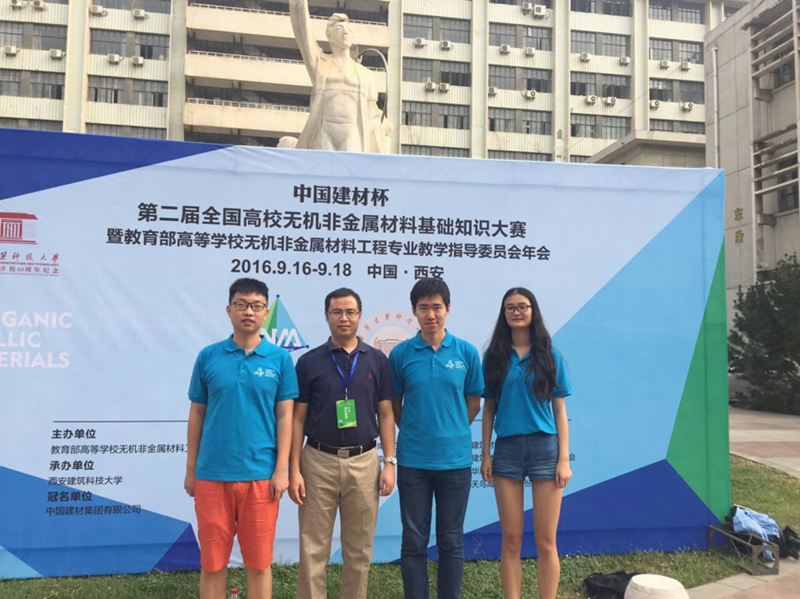 The contest was divided into the preliminary and final. Each stage covers a compulsory round, a rush-to-answer round and a Q&A session, respectively. The questions mainly focus on inorganic nonmetallic materials, material engineering and material characterization method. In the preliminary, “xmucer” performed very well and ranked the second in the sub-group. However, they lost the chance to access to the final due to the wonderful performance of other teams, and it is worth noting that they also obtained an award for excellent performance. The two grand prizes were won byteams from South China University of Technology.

Prof. Xue Hao said, “Our curricula, unfortunately, didn’t cover all the essential knowledge of this contest. As our contestants managed to pick up almost everything in the contest syllabus by themselves in such a short period of time,they are still deserved the encouragement and compliment indeed. Furthermore, this is our first time to participate in the event, but also accumulated valuable experience for the future”. Luo Qiming said, “We are very grateful for the support from College of Materials, which enabled us to compete with the elites from other sister-universities. Now we see our weaknesses and know where to go. We shall learn from them and strive for better performance”.

The National Inorganic Nonmetallic Materials Quiz Contest was launched by MOE Inorganic Nonmetallic Material Engineering Teaching Instructive Committee. It is a contest based on science and technology knowledge for college students studying this major. It aims to guide the teaching to strengthen both the basic and professional knowledge for inorganic non-metallic materials in colleges and universities, cultivate the comprehensive and synergetic abilities of college students, attract students to participate extra-curricula activities, and help to select the most talented students. The contest takes place every two years, the first was held in Ji’nan in 2014. This time, the contest was organized by Xi'an University of Architecture And Technology.