On 23 August, the 2016 TECO Green Tech International Contest Final was held in Taipei, in which XMU team won the “Humanism Award”. The team was organized and selected by XMU League Committee. It consists of three undergraduates from College of Materials and led by Associate Professor Yao Rongqian. With “High-Power LED Devices Based on SiC Heat Dissipation Ceramic Substrate”, XMU team stood out among 20 teams from prestigious universities worldwide and became the only one that won the “Humanism Award”, Tsinghua University is the other university from mainland China that has obtained the award in this contest. 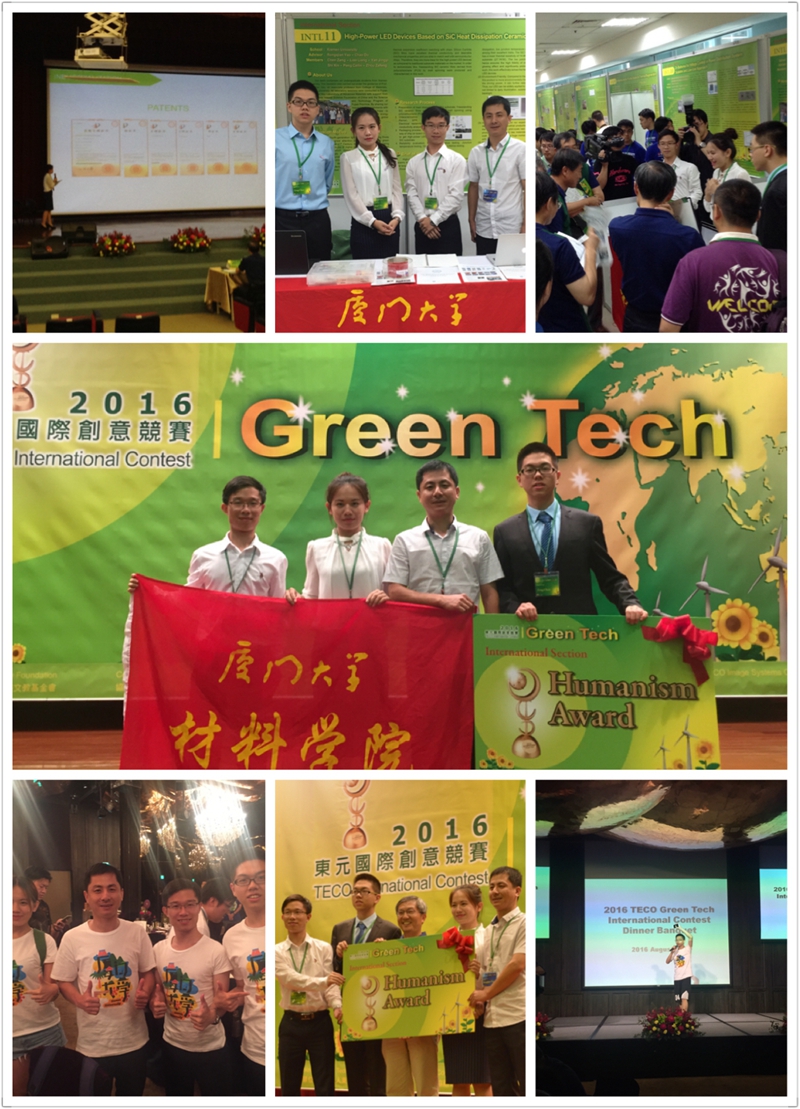 The contest was honored by the presence of world-class scholars and outstanding entrepreneurs as judges. It includes three stages, which are poster presentation, Q&A session and work demonstration. The contest required the presentation, communication and defense in English. To select the best team, XMU League Committee picked 1 team out of 20 after strict screening. The captain of the College of Materials team，Chen Zeng, an undergraduate of the Class of 2014. Liao Liang, the technical lead of the team said that the adopted SiC heat dissipation ceramic substrate was designed and developed by themselves, which could fundamentally solve the heat dissipation problem of high-power LED so as to push forward the LED industry and relevant semiconductor industries. The work has already entered the pilot production stage. Because of cheap production cost and a wide application, it has great potential in the market.

Our contestants were well-prepared and won much praise. During the contest, they gave full deliverance of Green Tech ideas and had extended discussions with other teams and Taiwanese entrepreneurs. Notably, with the delicate PPT designed by Peng Cailin, an undergraduate of Class of 2014, Yan Jingyi’s (an undergraduate of Class of 2012) presentation greatly impressed the referees with her fluent English as well as the vivid description. “Very glad to attend the contest on behalf of Xiamen University and won such an award! I want to thank all the referees for their sincere suggestions and especially I want to thank XMU League Committee and teachers from College of Materials for their support,” the team captain Chen Zeng said after the contest.

The TECO Green Tech Contest was organized by TECO Technology Foundation and co-organized by Industrial Technological Research Institute. IT aims to encourage students to study energy-saving technologies, develop technologies to improve energy efficiency, contribute to save energy and reduce emission and appeal for green practices. This year, the final contest witnessed 20 teams from world-class universities in 7 countries, including Tokyo University, Kyoto University and Waseda University from Japan, Manchester University from UK, Technical University of Munich from Germany, Lomonosov Moscow State University form Russia and National University of Singapore as well as well some universities from mainland China, like Tsinghua University, Fudan University, Nanjing University and Shanghai Jiaotong University. There were also doctoral contestants participated in the contest. After intensive competition, four awards were selected in the final. Among all the universities from mainland China, only Tsinghua University and Xiamen University obtained awards. Xiamen University, for the first time, was given the “Humanism Award” which was designed for works that can bring convenience to the elderly and to the physically or mentally disabled citizens, as well as for the works of energy saving and emission reduction that can improve cultural environment and people’s living quality.